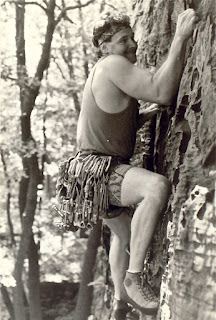 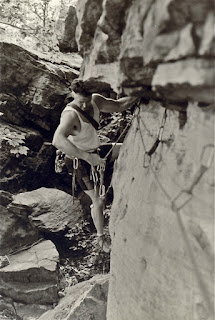 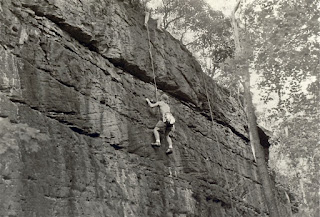 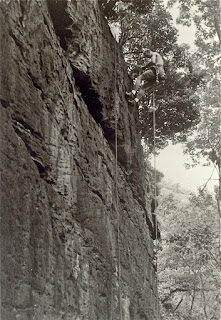 Old school images - a "Good-man" and Strongman Matt - two strong "dudes" back in the day
Better times before the sport was absorbed into "pop culture"
---------------
After many years, recently ran into an old buddy who worked out regularly at a small garage gym we had back in the late '70's. Nothin' fancy - solid bar and dumbell free weights, one store-bought bench along with another home-made bench or two and home-made cable machine. A ton of plates and dumbells. Our boy Derby had a father-in-law who was a pretty good welder/machinist. Along with the benches he'd fashion some heavy plates from pilfered sewer manhole covers (hey - look what we "found"). Derby, primarily a power lifter who regularly benched 400lb+ again set the standard. Workin' out heavy even the smaller guys were soon benchin' 300lb+, including smallest guy Dale who probably weighed 165lb soakin' wet. If ya' didn't get your workout in early before all the boys arrived forget it. It always turned into a strength contest after that. Always had a good time there. 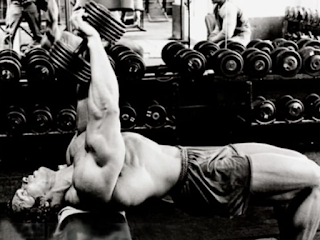 (Internet Image)
Hero of the day, 'Arnold', crankin' off some heavy cross-bench dumbell pullovers at Golds Gym, CA. Think that only one photo of our gym ever existed. No idea what happened to it.
Flashback to great times - our boy Rick is preppin' for a few sets of cross-bench dumbell pullovers. He's got the bar beefed up - 80lbs. "Hey Rick - watch the (screw) collars on those dumbells, they been workin' loose pretty easy of late".... "Don't worry 'bout me - I tightened 'em up! And double checked 'em!!". Three reps into his first set and full extension - first he get's the collar off his forehead followed by an orderly 10-10-10-10, then the bar. He drops the remaining 40lb right in his groin. The Stooges couldn't have staged it any better. The only thing missing were the sound effect chimes. Quick on the comeback, Derby deadpans "Hey Rick, what are those good for?" The place was breakin' up with laughter.
(YouTube Video)
---------------
A few days late - adding this in honor of Veterans Day. Post high school education and we had an excellent physics instructor named Mr. Paxton. Could never get into the chore of high school physics - went to a Catholic school and those female Nun by-the-book teaching methods weren't very stimulating, to say the least. Just couldn't crack the nut. Paxton's class was all guys enrolled in technical curriculum including construction, engineering, architecture and electrical. He was a retired physicist, having worked forty years for US Steel. He knew his stuff. Teaching us was elementary to him, and he'd cut loose. He had us calculating anything interesting to guys - ballistic pendulums (bullet momentum), ferry angles for canoe river crossings, crane loads and rigging, airfoil angles of attack. All real world use. All right off the top of his head, bordering on improvisation. Would only ever open the book to give ya' an end of chapter home work assignment. Of coarse, ya' had to read the chapter which was a lot easier to understand following his in-class instruction. If someone would comment upon his genius, his reply would only be "No, I've been doin' it for forty years". He even looked the part - a bit resembled 'Exeter' from the old sci-fi thriller, 'This Island Earth' - tall and thin in stature, large hands, receding silver-gray hairline with a "developed forehead" (could have been 'Professor Moriarty' right out of a 'Sherlock Holmes' novel). 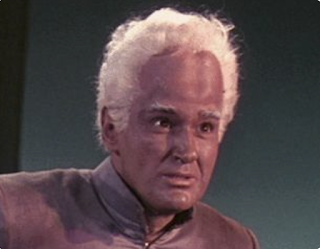 (Internet Image)
'Exeter' from 'This Island Earth (1955)' - gotta' be a distant relative of Mr. Paxton.
Mr. Paxton was a World War II vet. He related the story that during the war he was stationed in the South Pacific, along with one other guy, manning a radar installation on a small isolated pacific isle. The Japs knew of the radar and island but never bothered it because they would occasionally intercept intelligence transmissions for their own use. Besides, the island was quickly defended by air if attacked. He said that after month's of isolation they would have welcomed any action.
Once a month a supply boat or sea plane would stop by. Rations were sparse. They subsisted pretty much solely on canned corn beef hash - breakfast, lunch, dinner. They'd supplement it with what they could catch from the sea and fruits and vegetables from the island. One day the supply ship arrived carrying a package from his wife back at home in the states. Excitement. Upon opening the package, however, he discovered that the cargo comprised a several dozen can supply of corned beef hash. Said he almost tossed the entire package into the sea. To break the monotony, there was additionally canned fruit and multiple packages of chocolate and vanilla cake mix, so they at least had dessert to go along with the hash.
at 9:42 AM