A Broadsword and a Cross of Gold

A previous day of heavy showers and the Lower Yough is staging a solid Class IV. It's several decades before the first inflatable pink flamingo of recent mania thrashed the slots, drops and holes of the Upper Yough. There was still a bit of "here be dragons" mystique associated with paddling Youghiogheny River whitewater. Back then it was recommended "If the rivers running high, greater than 4ft OPG*(Class IV), head on up to the Middle Yough, Cassleman or Laurel Hill Creek (all Class II/III)". Nowadays, it's "If the rivers running low, less than 4ft OPG (Class III), head on up to the Upper Yough (Class IV/V). Better yet, just go to the Upper Yough. Gotta' love progress...

...we're too far left. F*k!! Missed the eddy turn. Now we're sideways, sweeping left, swiftly, directly toward the upstream face of infamous Dimple Rock. Innocent looking enough - it's set there for eons, a treacherous stone bulkhead to all things drifting river left. A submerged undercut can and has entrapped errant boaters, a few fatally. We couldn't have f*k'd up any less perfect. Port side of the raft slides up the pillow, starboard side drops below water level. A split second and we're swamped with a pounding three hundred gallons of river water. Full crew tossed starboard. The raft is levered into a momentary vertical pin on the rock face. The four of us are tossed ass over elbow into the drink. Textbook. Dimple Rock smiles.

A quick dunking and now, caught in the flow, sweeping river right. Kicking and paddle jousting through a pinball field of shallow boulders. Scanning downstream. Where's the raft? Spin to look back upstream. Here comes brother Howie sweeping in for the recovery. How the f*k did he stay in that boat!? I latch on to a vice-grip right hand and am yanked over the tube and damn near clean out the other side of the boat. There's some adrenalin pumpin'. Howie's holding control so I grab a plastic jug bailer and begin scooping river by the gallon from the swamped craft. Sh*t - where's the backpack!? Must have forgot to tie it down last stop. F*k - that means there went the car keys!! Where's those other two guys. Spot Wild Bill riding it out river right. Don't worry about him for the moment. He's solid. Besides, he'll hike back up river two or three times to do it all again anyway - downing a cold Bud each in-between.

Spot ten year old Strongman Matt several hundred feet ahead downstream. He's riding out a series of successive haystacks that at this water level I know is giving him a good dunking between brief gulps of air. We can't drown him. First time in the whitewater. His mom will never let me forget it. Howie and I put it in high gear. We don't reach 'em until the end of the run, regardless. All told a swim of around 550ft of swift water, small drops, shallow rocks, small to large waves. Paddle in hand, he flips the backpack up into the raft and climbs aboard - all smiles. Wild Bill seconds behind. All caught up.

"I had to really swim to catch up to it - another second and it would have been soaked and gone under. You didn't have it tied in. Hey Bill, you goin' back up?"

Solid from day one. 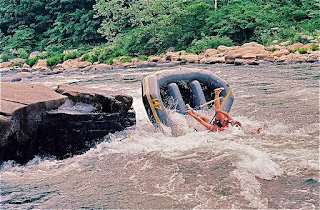 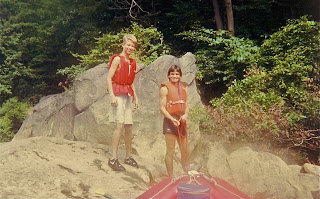 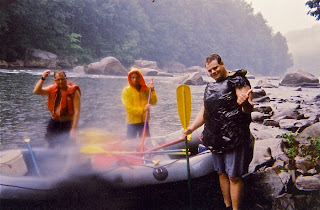 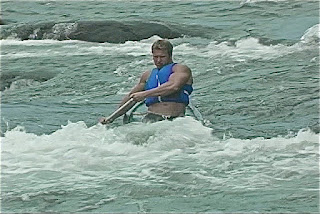 Now'days like to occasionally head out to the lake to paddle some laps on the SUP for exercise. It's 1.8 miles/lap. Try to at least get in two laps. Between 28 to 32 minutes per lap depending on mood and effort. Personal best is 22 minutes paddled once just to see how fast we could do it. Once is enough.

Last summer, Strongman Matt had just moved back east permanently from Vegas. The cancer which was wracking 'em pretty good in tow. He wanted to come along one afternoon, to come along.

Stand Up Paddleboarding is a pretty low impact workout, but a workout none-the-less. We always dial it up to at least the "minimum maximum", operating in the red zone.

We're relaxin' in some beach chairs along shore. He'd paddled around with his dog, Koji, a bit. Keeping within vicinity. Physically he didn't appear to be in condition to do a whole lot more.

"Hey Matt - I'm gonna' do a lap around the lake. Takes about a half hour. I'll be back directly.

A little over twenty minutes and heading into the return home stretch, maybe a quarter mile distance, puts you back in site of our "spot". There's Koji, leashed to the bumper and layin' under the vehicle in the shade. There's Matt's empty chair. Where'd he go? Look about. He's not out on the lake...???...

Come drifting into shore. Still no Matt. Never look behind. No reason to. Look back, he's been following behind the whole time. I'd cranked it up a bit, too, to get back around quick since he was waitin'. It was an extra effort, to say the least.

He's cruising along, radio headphones, listening to tunes or whatever he had dialed in. 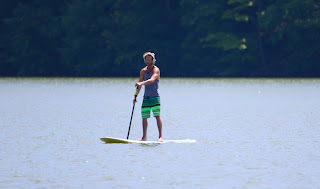 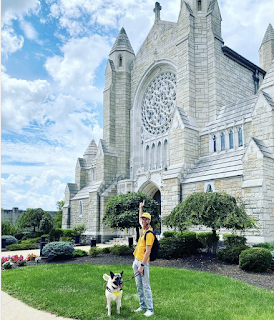 Go big or go home
You'd arrive to visit and always try to come up with some words of hope and encouragement, which never came. Most times check out an old Eastwood film. Maybe a Formula 1 Race. No moanin', cryin', bitchin' or feeling sorry for himself. May complacently describe to ya' how he had to remove or replace a two foot long tube in himself while ya' set there squirmin' in your chair. Solid as ever. You'd leave questioning you own strength and faith, not quite sure of who is the most ill.
--------------------
(YouTube video)
Tull
at 4:47 AM No comments: