We're a bit impressed with this mini LED light panel from these guys Nanlite - the LitoLite 5C RGBWW. Dimensional size of 4.2"x2.4"x0.9" at a weight of 4.8 ounces. Internal rechargeable (USB-C) Li-ion battery (cable included) - rated 1.5hr running time at full brightness. Adjustable CCT from 2700K to 7500K with green/magenta control. Adjustable HSI - 360º of hue control and 100 levels of color saturation adjustment. Dimmable from 0 to 100%. All controllable via a panel adjustment or wirelessly via smartphone by free app (which would let ya' control multiple panels). CRI of 95/TLCI of 97. Package includes a snap-on (silicone) diffuser and carry bag.

The panel is pre-programmed with 15 adjustable pulse special effects such as fire/candle, storm, explosion and welding, to name a few. That's somethin' different to us. Figure they could be useful if needed in video production. We would liked to have had the police car effect back in the day for final approach to after dark, in progress backwoods keg parties - that would have been some fun. Not a bad package for around $75. 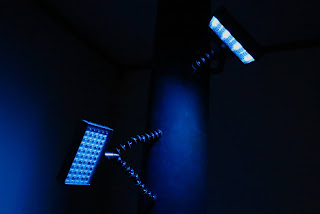 ... havin' some fun with a pair of a bit alien looking 5C's creeping up a stove pipe - HSI channelled (blue) 192/100/100 - didn't record the exposure info - (magnetic) GorillaPod 325's for support...
Stuff like this can't be totally appreciated unless you have invested days designing and piece-mealing a multiple halogen lighting system together and afterward spent several days wrestling the works, all housed in a large, unwieldly Pelican Case (not to mention several separate 12v batteries) throughout squeeze crawls, slots and fissures of an underground cave system. Those LitoLites would have worked well in the tight spots.
Edit 01/24/21: Someone commented/questioned (if we understand correctly) regarding the intensity of those lights, based upon their judgement of that digital photo. That image is actually exposed "day for night" in an interior room illuminated solely by (overcast) ambient daylight (around 1pm) filtering through three exterior wall windows - 10fc (say 110lx). Shutter Priority - 1,250/sec. We tend to work by eye. Have at it.
at 12:40 PM No comments:

Around '89 we had made a few friends in the New York City (NYC) film community, and up until around maybe '92, when the opportunity arose, we'd occasionally take the Amtrak train from Union Station in Washington DC (where we were living at the time) to Penn Station in NYC to spend a weekend assisting with independent film projects. We weren't interested in full time employment in the "business", just wanted to get as much experience as we could to apply to our own work. Didn't need the cash so we worked cheap. Compensation always included free lodging and dinner/drinks - always at a Greenwich or East Village bar/tavern - each "storied for the literary luminaries who habitually frequented them"(1). Our amigos themselves were all artist and literary types 'ta boot - these their hangouts. Combine like minded sensibility with cheap labor, along with the fact that we knew our sh*t - and we were always a welcome addition.

Experienced a few interesting adventures on set/location. Once positioned a few 5K lights a bit too close to an unseen fire sprinkler sensor, potentially dousing a mid level floor of a Manhattan office building. Luckily the sprinkler system didn't activate. Set about every alarm in the building off, though. The precinct fire chief was pretty cool about it. Showed up alone and casually walked in and deactivated the alarms. Another situation had us negotiating with a pistol-waving Latino gang leader who was (acting) a bit pissed and wanted to know who gave us permission to film in his "turf". Insisted that we were undercover cops intending to secretly film their activities(2). Turned out to be a good guy once he realized we weren't backin' down - and we weren't cops.

Had a few interesting adventures in the bars/taverns. Was seated at one tavern noted for the celebrity and "literary luminary" patrons table-top wood carving signatures, past and present. Ernest Hemingway had been one to initial our table. We added our initials right below his. Think it may have been the White Horse Tavern or maybe McSorleys. Don't recall right off hand. Maybe neither. Anyway, suggests great minds think alike. Got to bullsh*t a bit with Rolling Stone Keith Richard at the ACME Bar and Grill. Bought us a beer and we returned the favor. Ran into him another time at the Bluenote and he remembered us. Thought that was pretty cool of him. The best time was one evening we went to the Pyramid Club, which was a popular gay/transvestite bar (plenty of gay folks in the NY film industry - all good people the ones we worked with). We had among our company a very good looking aspiring actress/model who wound up being a big hit with the "boys". She was drinkin' for free all night and they continually had her up on the bar dancin' with 'em. We figured because she was OEM equipped. She was visually a knockout, but by late evening we had to rate her 5th place - there were some good lookin' "gals" in that place. She took first place in the "stock" division, however. Lot's of fun. We've been in plenty of bars over the years but we've seldom been treated any better than there. 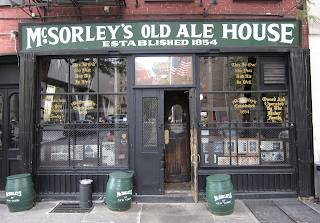 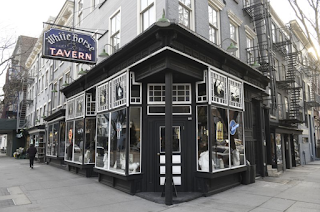 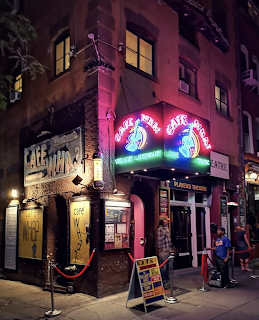 (Internet Image)
Cafe Wha?
This place was originally established by (Van Halen) David Lee Roth's uncle, Manny Roth.
Recalled list of hangouts - no specific order - don't even know which ones are still operating:
White Horse Tavern          Petes Tavern
Old Town Bar                   Chumley's
Up & Up                           Minetta Tavern
McSorley's                        PJ Clarkes
Whitehorse Tavern           Cafe Wha?
Pyramid Club                    Blue Note
ACME Bar & Grill             Mars Bar
The Odeon                       Nuyorican Poets Cafe
Probably have forgotten one or two that we could add to the list.
We had a few beers at the St. Marks Bar and Grill. Now closed we learn. Is where The Rolling Stones partially filmed their video 'Waiting On A Friend' (see below).
There was a pretty good country & western bar. Don't recall the name. Thought it was a pretty cool place for being' in the middle of NYC. Was funny watchin' people walkin' in and out and down the city street dressed like cowboys when ya' know that most of 'em wouldn't even know how to start a lawnmower.
Which sets up our short tale:
One of those friends contacted us a few months back saying that, because of the so-called pandemic and, combined with the city's sorry state of affairs, the whole town is quite a mess. Commented that things had been going downhill long before that. This just exacerbated the situation:
"What a mess - everything's closed - can't get anything - you don't even want to go out after dark - you guy's don't see this stuff on TV - gettin' to be almost like the old movie 'Escape From New York'... lookin' at a place in your area in PA - gotta' get outta' here!"
Heard from 'em again just before Xmas:
"Hey - purchased a place in SWPA (we're not sayin' where)... not far from a small regional airport (frequent occupational travel)... fifteen minutes from the house."
Reply:
... "That's great - just don't tell anybody to follow ya." 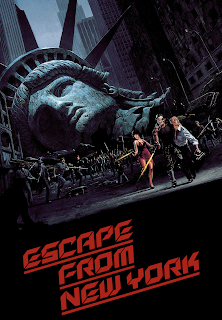 (Internet Image)
Unfortunately, we know where this could lead... we got to know Greenwich and East Village pretty well - we're told that we wouldn't even recognize 'em now'days.
Hey - just let these guys run the city:
(YouTube Video)
(YouTube Video)
(YouTube Video)
We were attending a film program at NYU for a period. We'd visit this small bakery and get a nut roll and carton of orange juice every morning for breakfast, then set outside on the staircase to eat before class. We're settin' there early one morning around 7am. Here comes another guy enrolled in the program walkin' down the street toward us. He gets closer and we notice he's staggering all over the sidewalk. Closer still and we see he's decked out like headin' out for an evening on the town. He was one of those left over disco guys from the late 70's and for the most part was dressed like it. However, he's got blood all over the left shoulder and down the sleeve of his light-colored leisure-style jacket. The rest of his jacket and matching pants are smeared with dirt. The left pant leg from pocket to cuff is completely slit to the outside - every step forward exposes a bare leg. The left rear pocket is completely torn out - would be showin' some bare ass if he wasn't wearin' underwear. Hair is completely disheveled. We're thinking' he got run over by one of the garbage trucks or buses out makin' their early morning rounds.
"What the f*k happened to you?!!"
Turns out he was out at the bars 'till late that evening. Around 2am he's pretty well loaded and decides to hit up an ATM - on a NYC side street yet. Uh-Oh - the sites bein' cased. Said the machine no sooner dispensed his cash when a guy comes running out of the dark right toward him. He "puts up his dukes" to defend himself. The guy charging immediately hollers "Joe!! Vinnie!! Last thing he remembers is getting clubbed over the head from behind. They took his withdrawal and practically ripped his pants off 'em to get his wallet. He wakes up layin' on the sidewalk at around 6:30am.
"People were just walking around and practically stepping over me - just like I wasn't there!"
We never laughed so hard in our life!
(1) To paraphrase the title of a recent book on the subject - 'Storied Bars of New York - Where Literary Luminaries Go To Drink, Delia Cabe, 2017.
(2) We were out shooting some establishing/transition 2nd Unit-type stuff. Referred to as B-Roll footage now'days (video jargon). "Cut to the horse" (film jargon) then.
at 12:32 PM No comments: