There on the ridge, beneath the sky,
A cowboy stretched and yawned,
He slipped into his high heeled boots,
His chaps and gun he donned,
He saddled up his old cow horse,
While his trailing dog stood by,
He turned to take a farewell look,
A tear was in his eye.

He gazed out o'er the Goshen Hole,
And sadly shook his head,
He rolled himself a cigarette,
And to his horse he said,
"The old cow range is gone, pal,
There's barb wire all around,
There's a dry on every section pard,
And they're plowin' up the ground.

"They're plowin' up the grazin' land,
They've wrecked our happy home,
They're killin' all the salt grass out,
Where the doggies used to roam,
Things ain't like they used to be,
In the Goshen Hole, old hoss,
When you was top of all the heard,
And I was wagon boss.

"Do you see that bank of alkali,
Just beyond the squatters' shed,
That's where you caught me off my guard,
And pitched me on my head.
You were just a bronco then,
And your manners pretty bad,
But you've made up for all them tricks,
You're the best hoss I ever had.

"And over there by that new fence,
Is where you split your hoof,
And we sure took a dirty spill,
When I roped that Lobo wolf.
But the wolves like us have gone, pal,
New homes we'll hafta found,
We'll have to find another range,
Where they don't plow up the ground.

"Where they don't mess up the ground,
With their chickens, hogs and plows,
We'll find a brand new range, old man,
And start a-runnin' cows."
The trail dog sensed that things were wrong,
The cow horse shook his head,
The cowboy raised his voice,
And in these words he said,

"Farewell to you, Drys and squatters,
You've settled old Goshen at last,
And we wish you luck in the future,
That us waddies have had in the past.
But you'll never have the freedom,
We had in the days gone by,"
And he stepped up on his old cow pony,
And waved his last goodbye. 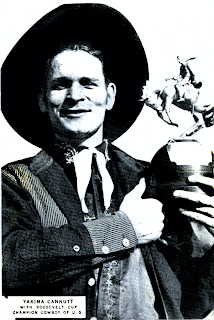