The 'Workout Boulder' (aka: 'Rat Block')

Had been climbing for about a year and reached a pinnacle - around 6'-1" tall and maybe 210 pounds light (down from a 240 pound weightlifter) - stuck at 5.8 ability, at best. Fumbled on my own for the first six months 'till I "got around". Been climbing with "hard-ass" Rob Goodman for the past six months. Goin' to 'High Rocks' in Derry, PA about every weekend. Robs got the whole place wired and really workin' me out. Example: He climbs 'Mysticism' routinely on lead, places two cams, three at best, then downclimbs and cleans the route - I'm spending hours belaying between fallin' off the same old holds week after week. Rob jackin' me to no end.  OK - thats what I'm used to from all the gym time from the ironman days. I'm reading every issue of 'Climbing' magazine and the like that I can get my hands on - what's this BOULDERING I'm reading about? Screw this weekend roped stuff - I'm living minutes from some of the best bouldering around (didn't know it at the time). Head up into the Casparis area of South Connellsville (my back yard). A few weeks of hard bouldering (un-beknownst to Rob) and I'm suddenly crankin' High Rocks - from the walls to the boulder problems. Rob's startin' to take me serious.

We routinely climbed a short High Rocks classic called 'Jimi Hendrix', rated 5.10 (a boulder problem now'days) in the old EB climbing shoes. In short time, a Spanish company, Boreal, comes out with a new shoe with vastly improved cohesive "sticky" rubber - 'Fires' (Fee-Rays, phonetically speaking). The great climber, and Rob's hero, John Bachar, is the poster boy for the shoe. First tried them out at Seneca Rocks (got the first pairs at the 'Gendarme' climbing shop) and was impressed - stemmed/edged the whole way up 'Greenwall' (a moderate 5.6) with ease - no kidding - felt at least two grades easier sans EB's.

Later on, we're back at Hendrix. Good test for the Fires. Steep thin slab. I tried to do a direct route - the original route slightly angled in from the right - "What are ya' doin' - you're not on the route!!" I cruise it, straight up, after about four - five tries. Rob fumbles with it several tries and finally relents - "That's not the way the route goes!!!!" A few years later, I picked up a copy of a guidebook titled 'Rock and Road' (or somethin' like that) for Rob - had a few of the local SWPA spots (somewhat) detailed. I noticed that Hendrix was rated at 5.12. I pointed this out to Rob. Rob off-handedly mentions that Hendricks has been upgraded to 5.12. Someone put up a direct start some time back. Never mentioned who, and I didn't ask (or care).

Fell in love with this new training method. Was a hassle, however, constantly doing my bouldering "circuit" - most of the rocks had maybe two - three problems (un-roped), then its change back into the trail shoes and move on to the next. I need to find a boulder with a multitude of lines where I could spend time doing laps. There was an excellent boulder just thirty seconds walk off the Casparis trail road. Problem was - there were again only two to three lines. The boulder had an excellent southwest facing vertical wall, around eleven feet tall at its highest (I measured it). Less than five holds, and small crimpers at that. Screw it - nobody cares anything about this rock - I got out the hammer and chisel, and in a short time I added close to six thin lines - all crimpers with an excellent landing (no crash pads back then). Over time I added a few more lines. All in all - if you count all the routes - one lap gets you around 110 feet of climbing! I would routinely try for four laps - getting in a minimum of at least 250 feet per visit. Though referred to as the "Workout Boulder", it is officially identified as the "Rat Block". There's another smaller block maybe 75 feet west with two lines - both short moves up an overhanging face to a difficult mantle - a third if you add a traverse across the mantle. This is the "Mouse Block" (all this discussion of muscle cars flicked the light switch for this post - Chevy big block and small block engines were referred to as "Rat" and "Mouse" back in the day - hence my "logic"). I also added a homemade "Bachar Ladder" to the area (is still there), and had a chin-up bar between the trees for a while (it disappeared years ago). All in all - was (and still is) a regular "Jungle Gym". I'd say the moves are within the 5.10 range, however, Tim Anderson said that he added a few "sit-starts" a few years back. The mostly crimper holds can wear the fingertips quickly if out of shape. I always figured that if you can climb 5.10 competently and consistently, you could travel to most any climbing area and have fun.

I heard I caught some flack from a few climbers, indirectly through Goodman, for these antics. Never really cared.

Comment on the last photo: Been reading a recent post on a popular climber forum. The 'old fogies' who regularly post been commenting about some fourteen year old asian girl who is regularly flashing 5.14+ climbs right off the shelf. "She only weighs, like, 110lbs soaking wet - not a big deal considering her strength/weight ratio - climbers should be rated like boxers and gymnasts - lightweight, heavyweight.....". No one ever brought up that discussion when I was hangin' right along side guys 50lbs lighter than me - if I didn't get up somethin', I was told I sucked.

A final comment: I figure at best either rock makes for a nice tombstone - just scatter my ashes throughout the brush. HA!

Mentioned earlier (500 Horsepower Reality) that I was out west this past spring. Rented an SUV (more on that later) and headed over to California for a few days - destination Lone Pine, Bishop and the eastern Sierras. Traveled Rt 190 from Las Vegas, via Death Valley. Pretty cool place - hung out for a while, but definitely need to return as a point of destination. A few photos:


Temperature at the Dunes was around 115 degrees (F). Ran into a young Japanese couple while hiking around. They stopped me and asked if I would snap a photo of the two of them together (using their camera). I noticed that the gal was barefoot, carrying her sandals. I also noticed a desert sidewinder track nearby (saw quite a few). I snapped off a few photos before mentioning the tracks, as well as that I'd bet the critters (snakes, spiders, lizards etc..) burrow into the sand during the day to escape the intense heat - probably not a good idea to roam barefoot. She immediately leaped in to guys arms. HA!

When returning later in the week I was traveling east through the Darwin Plateau area, over the steep mountain pass. I was winding my way down to the valley. I suddenly heard a deafening jet engine - sounded like it was on the roof of the SUV. I'm looking all around and up through the sun roof for this thing - wherever he was, he was right on my ass. I'm about ready for a missle or two to blow me off the road, when I round a sharp bend with a clean view of the valley floor, probably 3,000 feet of air below.
ZOOM!! - this F16 fighter jet comes blasting straight up out of the valley, probably 200 feet away - he does a steep bank turn with barrel roll to the east and shoots off like a rocket (or a jet) before I can even perceive what happened. I pulled off the road and grabbed the camera - hoping he would return. No luck. I'm sure his "maneuver" was on purpose - having some fun with the "dick" in the black SUV. Glad he's on our side. I'm sure he came from the China Lake Naval Weapons Center which is just to the south of the Valley.

Here's some snow conditions today atop Chestnut Ridge - just off Sandy Flats Road. About four inches. The Laurel Ridge State Park cross country ski area showed about a foot on their webcam -  http://www.paccsa.org/lrwebcam. Will take another hurricane any day. 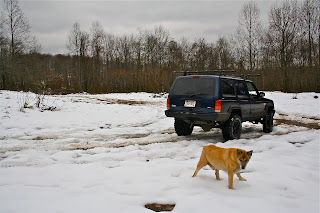 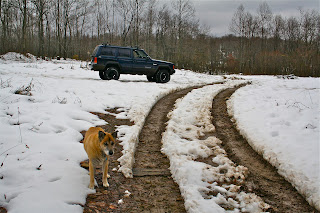 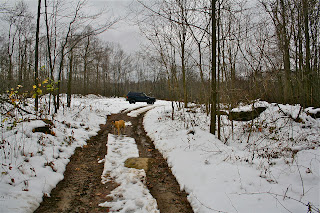 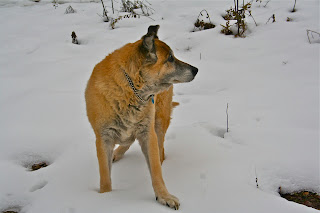 Didn't seem too good for any skiing, however - was pretty wet