... was out visiting a project site for the "real job" a few weeks back - was accompanied by one of our younger guys (not long out of engineering school)... along with a few others we were meeting with a local rep from one of the city public utility providers, who in the course of discussion mentioned that the professional wrestling great, Bruno Sammartino, once lived in the area, which was now part of an expanded city park...

... "Who's 'Bruno Sammartino'?" asks our young hand... well, everyone just stared at him in disbelief and it was crickets... 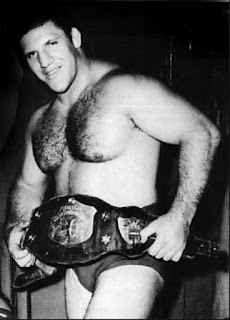 (internet image)
... this be the man, 'Bruno'...
----------------
... speaking of which, we learned that another wrestling great, 'George "the Animal" Steele' passed away last week - here's a highly entertaining clip and some great "theater" of the 'Animal' in action (along with 'Randy "Macho Man" Savage, 'Miss Elizabeth', 'Ricky "the Dragon" Steamboat and "Mean Gene" Okerlund; with 'Vince McMahon' and 'Jesse "the Body" Ventura providing color commentary):

... Rest In Peace George, "Macho Man" and Elizabeth...
----------------
... "Studio Wrestling", as it was known at the time, used to exhibition at the local civic centers, armories and high schools and such back in the day before expanding into the much larger and successful 'World Wrestling Entertainment (WWE) of today... we caught a stellar lineup at the local Junior High School back in the late 70's, which included 'Bruno Sammartino', 'The Batman', 'George "the Animal" Steele', 'Domenic Denucci' and "Jumpin" Johnny DeFazio among others... had great seats, and about halfway through the line-up, and between matches, took a quick trip to the men's room... the place was jammed, so was a bit late on the way back to ringside... on the return we noticed 'Domenic Denucci' standing just outside the locker room door and between the bleachers, dressed in street clothes (running shirt and slacks) and observing the action... 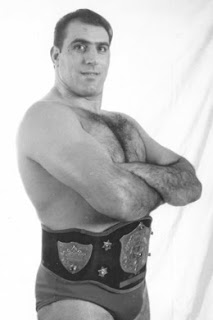 ... his bout had been first on the card and he was through for the evening - no one was noticing him as he was back of the crowd, whose attention was transfixed on the ring action - so, took the opportunity to go over and strike up a short conversation... he supposedly went around 245lbs, but looked a lot slimmer and in great condition - we were both around the same size (heavy lifting days on my part - actually think that I may have had some size on him)... so we're standin' there talkin' (heck of a nice guy) when this older lady comes up and asks him to autograph her program for her kid (still got mine) - "Dom" scribbles his signature and she then turns and hands the program to me - OK! - I signed it as well (hey, she asked) - made sure that I inked it very clearly and legible as well... so, probably to this very day there is still an old wrestling program out there with my one and only ever autograph - probably worth a few bucks by now ($1?)... wonder how many times someone has viewed it and commented "Who the f*k is this guy!??"...
at 4:42 AM No comments:

The Sky Above, The Mud Below

... wanted to include this the last previous post as an aside to the "Expedition Sewing Kit" but for the life of us couldn't remember the name of the movie... after a bit of searching on-line this past week we present: 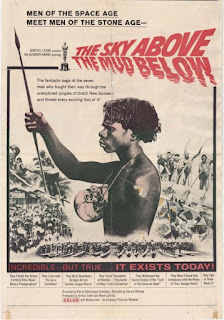 ... along with the "skull-bone necklace", love the tag lines:

... man, not unless you got a thousand man-eating savages ruining your picnic you are just beginning to get away for the weekend... saw this film in the theater as a kid, probably eight years old, but have never seen it since - remember we saw previews for it the previous week while watching "Party Beach Monster" or something there other - was to be double-billed with some flick titled something like "World Without Sin" we recall - the trailer for which showed plenty of topless (white) babes frolicking on some "uncharted deserted isle" - sat thru 'em both twice!!... Amazon currently offers only a VHS copy of the tape, but we discovered that theres a DVD copy of a film titled "Black and White in Color" that contains "The Sky Above, The Mud Below" as a bonus feature...

... as an added bonus herein, included in our search we came across 'David Lee Roth's' (yea, of 'Van Halen' fame) account of his own early 1980's trek across New Guinea - coincidentally, he also references "The Sky Above, The Mud Below":

Update: 02/26/17:
... picked up a DVD copy and checked it out this morning... Holy Hell!! - been years since we'd seen it, and then at 8 years old - cannibals, leeches, head hunters, flies, torrential rain, more leeches, heat, more flies, freezing temperatures, even more leeches, mud, even more flies, floods, tropical disease... and leeches and flies... the best thing that could happen to ya' on this trek was to die... highly recommended viewing - we give it 5 skulls out of 5... definitely gotta' get us one of those skull backpacks...
at 9:27 AM No comments: