We've always been a bit fascinated by stop motion photography. Saw the fantasy adventure 'Jack the Giant Killer' first run at the local movie house as a youngster. Six years old and was completely dazzled by the images of the on screen "giants" menacing our hero Jack. Had no idea of the talent nor cinematic process employed to bring the animated creatures to the screen. Could have been real for all we knew. Do recall that the images of the frightful banshees attacking Jack's ship (although not stop motion process) had us checking under the bed and looking in the closet before turning in for weeks thereafter. Mom was no help either, promptly reminding us to "go ahead - keep it up and I'm gonna' tell the banshees to get 'ya" each instance we'd piss 'er off. We'd settle right down. 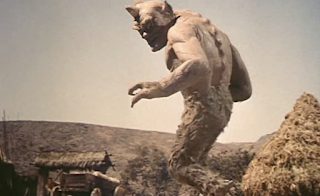 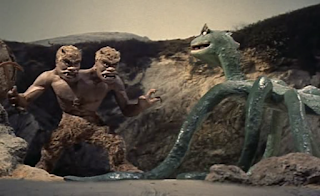 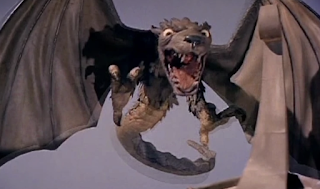 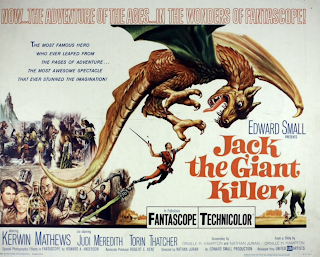 (Internet Images)
We subsequently, and to this day, check out anything stop motion animation. Top of the list is all  Ray Harryhausen's efforts (obviously), down to anything with as little as a few seconds of stop motion in the storyline. 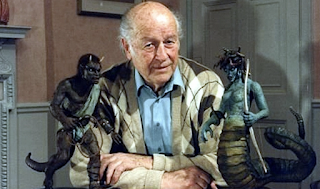 (Internet Image)
Ray Harryhausen - the king
Once a bit older we attempted a bit of experimentation of our own. At the time there was zero information nor reference available to the stop motion process. There would be an occasional article in publications such as the "monster" magazines of the times. Problem was, those articles were written mostly for the fans of the genre with very little to no reference to the technical. We wanted to know what these guys ate for lunch. Our efforts went as far as shooting two test reels. Both Super 8mm film format. One reel of color and the other black & white. Both reversal film stock. We also shot one preliminary reel of live action test footage so we could evaluate single frame movement captured over an 18fps (frames per second) frame rate, to later visually sync the animation.
We had no idea how to construct a posable miniature figure. We used a toy army action figure of the time as our prop. The figure had articulating neck, shoulder, elbow, hip, waist and knee joints. We heated and melted 'em a bit and smoothed out the molded features. We then jazzed 'em up a bit, painting a solid blue. We widened the eyes by melting with a heated metal punch, filled 'em with a dab of model glue then painted 'em yellow with black eyeballs. After adding two black devil horns on his head and two black wire frame and cardboard bat wings fastened to his back, we had a decent representation of a 'Harpy' creature a la 'Jason and the Argonauts'.
After anxiously waiting a bit over a week to get our footage back from processing (no instant gratification in those days), we found the results to be pretty acceptable. We shot maybe four minutes of footage - around two minutes of each format (B/W and color). Maybe thirty seconds of actual flying Harpy
animation, each. We had our Harpy flutter down (maybe six inches), land in a squatting position on the roof of a metal yellow toy taxi (that we found lying on a sidewalk), look left/right (articulating at neck and torso), then fly off again. The scale of the taxi matched the figure exactly. Worked well to give a sense of scale to the shot. We glued some magnets to the soles of the Harpy's feet for stability. He was also fastened to a metal wire rod for aerial maneuver. A second sequence had 'em stand and swing around a scale prop sword to match the live action footage we shot earlier. One of two things we learned was that the wings could have been moved a "beat" faster to give a better representation of flight. The second was that regular movement (swinging the sword about) worked better when we halved the distance of movement (B/W reel) between frame rate of live action and animation which achieved a smoother, fluid and not jerky movement. The B/W footage looked a lot more realistic than the color - both were lit low key. We do have to admit that even our amateur effort looked better than a few of the hideous, cheapskate double-exposure effects witnessed in several low budget Hollywood productions of the era.
Wish we still had those two rolls of film. Unfortunately, they were pitched out long ago (along with everything else) during the "great attic purge".
(YouTube video)
A bit of the Harpy sequence from 'Jason and the Argonauts' 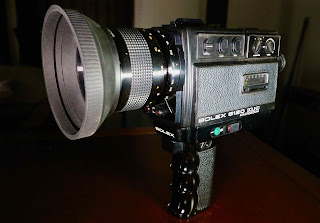 The old Bolex 5120 Super 8MM - the single frame exposure capability with (cable) remote control made this a pretty good camera for achieving some low budget animation. Macro focus function. In camera fade in/out. The only drawback was the limited printing capabilities with the Super 8mm reversal film stocks. We would had moved on to 16mm had we proceeded further.

Here's an example no-budget miniature set we currently whipped up. Wire armature figures (we ran low on wire for the bigger guy) - two guys being menaced by a rattlesnake
There were only a handful of guys doing this stuff professionally. Most notably Willis O' Brien (original "King Kong'), Jim Danforth ('Jack the Giant Killer') and the master, Ray Harryhausen (anything he touched). Always working under tight budgets. Often in a small studio fashioned in the back yard garage. We recently came across this short YouTube video compiled from personal test footage animated by a guy named Pete Petersen, a "grip turned animator", who worked throughout the '40's and '50's. Totally unknown to us until now:
(YouTube video)
Wow - some great stuff. You can't get any smoother than that. Great miniature set. Superbly lit. We feel that black & white photography lends itself very well to animation - especially when masking in live action. Our personal preference to color photography every time. That is some excellent work. Even more impressive when you learn that Petersen suffered from multiple sclerosis at this stage of his life and was unable to stand continuous, being forced to work from a seated position.
(YouTube video)
Here's the 'Las Vegas Monster' sequence from the previous clip edited with some contemporary sound effects - nice work 'Cosmorico'
(YouTube video)
Brilliant stuff here. Those are actual '40's  era "strong men" 'ta boot. Gotta' like the catcalls from the gals in the audience. Joe's right up there with 'Clint' and 'The Duke' in our book.
at 12:22 PM No comments: